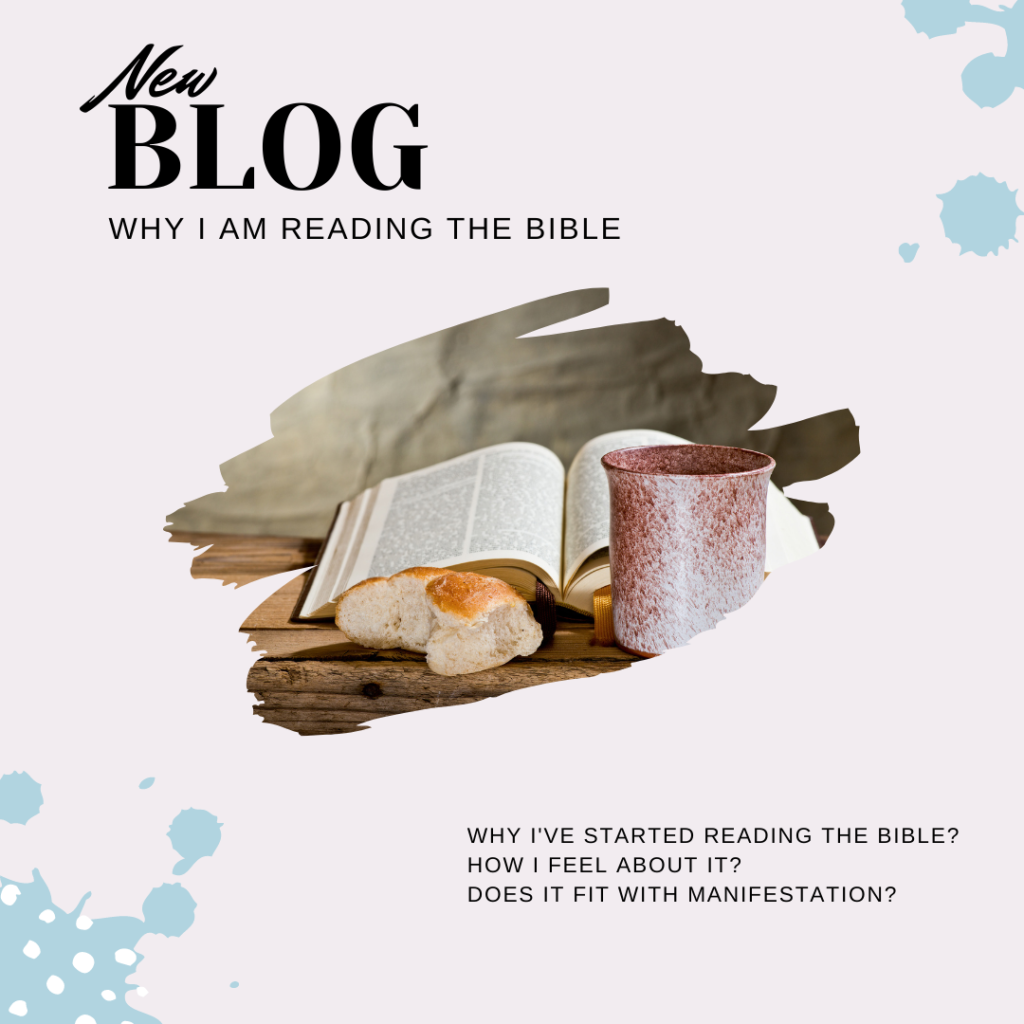 This is a blog post I never imagined writing and even as I write it, I’m not entirely sure why. But one thing is for certain, I believe in inspired action and the act of reading the bible and the writing of this blog post were both of that nature.

This isn’t necessarily anything a new idea and I’ve considered purchasing a bible and study guide for quite a few months, but on all those past occasions I have managed to take myself out of it.

It all started with one of the very few YouTubers that I watch, an American called Renee Amberg and while I found her channel for the Law of Attraction content she used to make, I stayed because she’s so relatable.

Her vlogs tend to be fairly motivating, she shares her struggles with an honesty that feels incredibly raw and rare, and I continue to watch her content, even though she no longer makes the spiritual kind.

In the past, she’s been open and honest about her issues with organised religion, believing – as I usually do – that it tends to be more divisive than it is good. But earlier in the year, she shared how she’d been seeking solace in the bible.

Why am I reading the bible?

Here’s the thing. Naturally I, like most people, associate the bible with the church and organised religion and I’ve never imagined reading it from a neural or apolitical standpoint. I never thought that someone like me, a spiritualist who finds organised religion generally stifling, could ever find comfort in the teachings that it offered.

Since then, Renee has shared her experiences, affirming that it’s done wonders for her mental health and while for the most I’ve overlooked it in its entirety, this month I felt called to join her on her journey.

It wasn’t so much an influence thing, it was more of a curiosity, an interesting ritual for me to add to my spiritual routines, and something I wanted to experience. It felt as if it was something worth trying and I also wanted to see if there was anything in particular that I could learn.

And so, a few weeks ago I purchased a copy of the ESV’s basic study bible, wanting something I could really get my teeth into and not feel immediately put off by. It’s for that reason that I actually chose the same bible as Renee herself because it comes with detailed and understandable explanations and other information.

Alongside this, I also downloaded a ‘52-week study guide’, a product that is included for anyone with Kindle Unlimited.

So, in a nutshell, that’s why I’m reading the bible. A combination of what felt like a good idea and a curiosity to see if it could bring me some solace too. 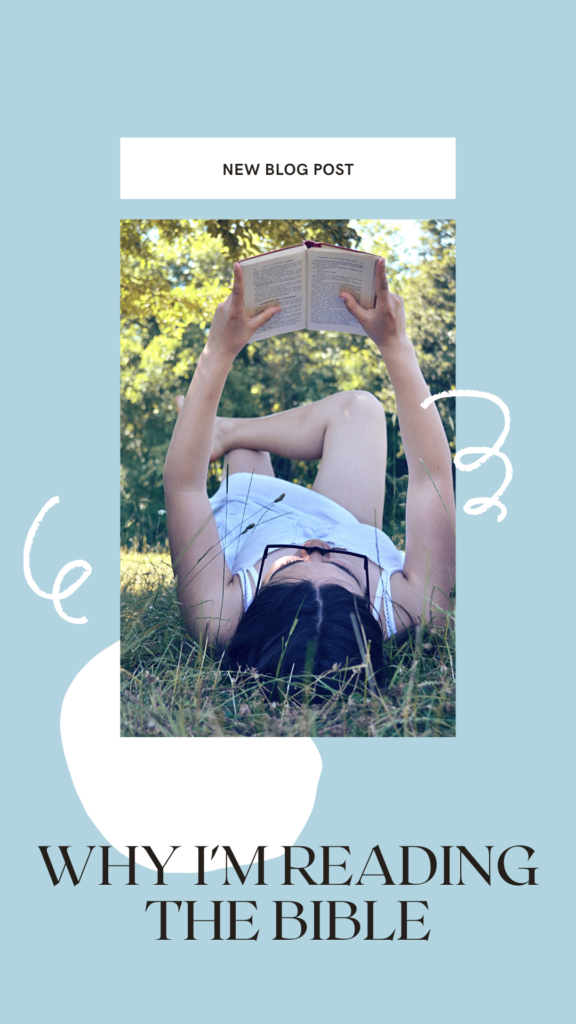 When I wake up in the morning, make myself a cup of tea and check in with my mindset, my bible reading ritual is always on my mind and it’s one of the things that I am currently looking forward to. It feels like a really ground practice and so far, I have honestly been loving it.

I think the bible I chose really, really helps because it breaks the stories down into easily digestible chunks.

And here’s something that has surprised me.

The 52-week study guide allocates a particular part of the bible for each week of the year, providing a particular set of bible verses for each day of the week and it does this to help make reading that little bit easier.

And I’ve been doing that every single morning because, in all honesty, it really doesn’t take that much time, and regardless, it’s a practice that I’ve been really enjoying. But during the day, I often find myself wanting to pick it back up and to carry on reading.

This is the one thing that has really surprised me because I didn’t imagine that I’d enjoy it for a second.

I do manage this by the way because I know what I’m like and if I let myself get too excited or too enthusiastic about the process, it will lose the paced and calming feel that the ritual currently has. And so, if I feel called to read more during the day, I allow myself to re-read any of the chapters that I’ve already covered.

Are you a Christian now?

Confession. I attended a Church of Wales secondary school and so in that sense I was partially raised as a Christian. But as my family is not religious, it’s not something that translated into my home life, and nor is it something that I have carried forward with me.

I can’t honestly see myself attending church regularly for the time being but for me, there is a huge comfort and hope to be taken from something the teachings that the bible has to offer.

Can you read the bible AND believe in manifestation?

I believe that you can and as far as I’m concerned, the two are complementary, they can be taken together or alone.

In fact, many Christians might have overlooked how intertwined the two concepts are because the Law of Attraction is referenced in the bible on numerous occasions.

Here are a few examples:

“And all things, whatsoever you shall ask in prayer, believing, you shall receive.” – Matthew 21:22

To finish I want to say this. I am well aware that this is a very new habit, and I am not putting any pressure on myself to keep it up.

Obviously I am loving it, so I really want to but I also understand that sometimes things get in the way and it’s important to be flexible. In fact, I might revisit this in a few weeks or month’s time and let you guys know how it’s going. 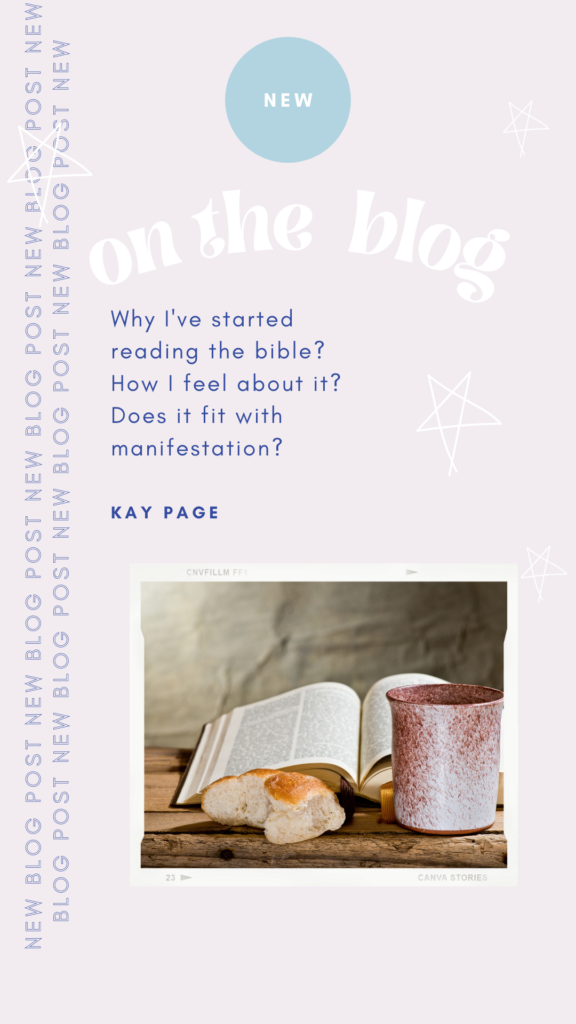